Jammu , the winter capital of the Jammu & Kashmir, is known as the “City of temples”. It is believed that the city was originally founded by Raja Jamboo Lochan who lived in fourteenth century B.C. The Raja had gone out one day for hunting when he happened to witness a tiger and a goat drinking water from one and the same pond.

This extraordinary phenomenon set him thinking and he decided to build a city at this site so that the strong and weak could live together in peace and mutual tolerance.

Depicting a breathtaking diorama of natural beauty, Jammu and Kashmir boasts of several interesting places to visit. And in between this majestic allure lies a heavenly world. The religious richness of the state is very well represented by its several sacred shrines that make it an ideal pilgrim destination in India. From temples to mosques to Gurudwara, there is a spiritual house for people of all faith which in turn make Kashmir pilgrimage tour quite popular among devotees and general tourists.

There are several religious places in Kashmir that adorn the landscape of the valley with their heavenly presence. From the mighty presence of Amarnath Temple on Mount Amarnath to the shining white marble structure of Hazratbal Shrine at the shores of Dal Lake, most of the pilgrimages in Kashmir feature picturesque locations, making them a wonderful treat for the eyes.

Kashmir pilgrimage tour also provides an insight in the historical grandeur of the region through its architecturally rich shrines. Though there are several noteworthy sacred sites but the harmony depicted by Hari Parbat is a talk of admiration. Located on the outskirts of Srinagar city, Hari Parbat is a hill that houses one Hindu shrine, a Gurudwara and two mosques standing side by side. The other popular and sacred pilgrimage centres in Kashmir are Jama Masjid and Shankaracharya Temple in Srinagar; Charar-e-Sharief situated en route to Yusmarg; Martand located about 5 miles from Anantnag; and Baba Reshi Shrine at a distance of about 5 km from Gulmarg. 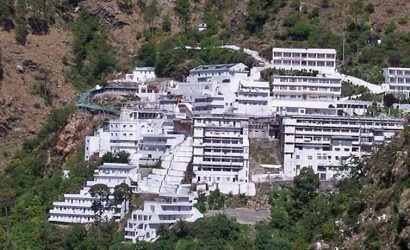 A visit to Kashmir wouldn’t be complete without taking a few side trips out into the glorious Kashmiri countryside (after all, Kashmir isn’t called the “Switzerland of India” for nothing!). It’s filled with flowers in spring and snow in winter. Pretty Kashmiri villages with traditional wooden houses and colorful rooftops can be seen along the way. These popular tourist places in Kashmir are good starting points.